One On The Bund @ Clifford Pier

With all the fanfare surrounding the 2 casinos in Singapore, it is easy to forget that many other new places have opened in recent weeks. 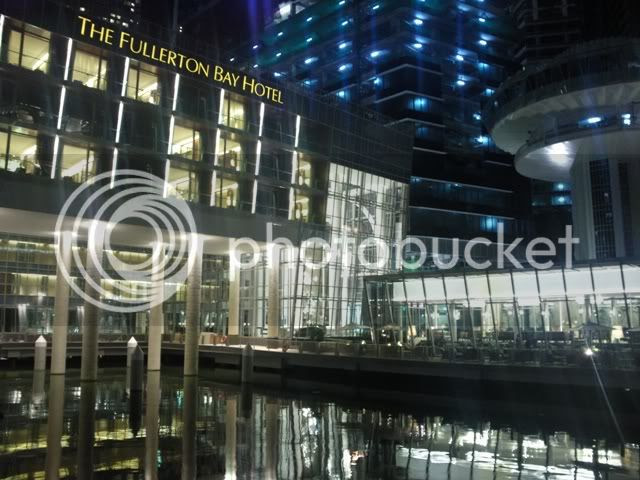 The Fullerton Bay Hotel, situated right where the former Clifford Pier was, recently opened its doors to the public. With room rates starting from a pretty affordable S$388, this 100 rooms plus 6 themed suites with a magnificent view of Marina Bay caters to the average as well as well-heeled travellers. 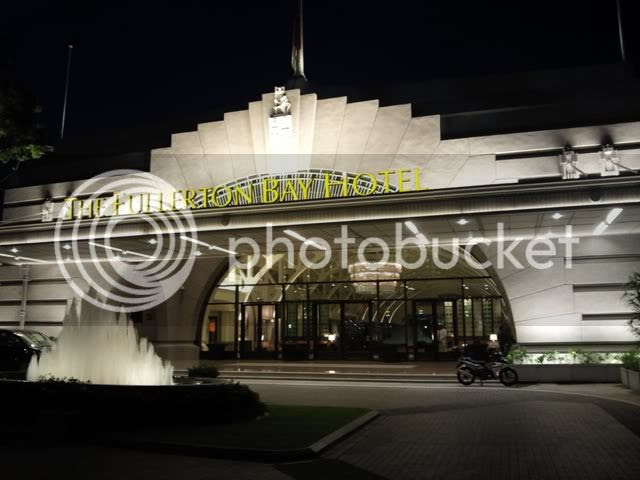 I remembered coming to this old Clifford Pier when I was small to take a boat to some islands. During that time, it was old and dirty. Many people lined up the pier during New Year's Countdown to enjoy the fireworks. 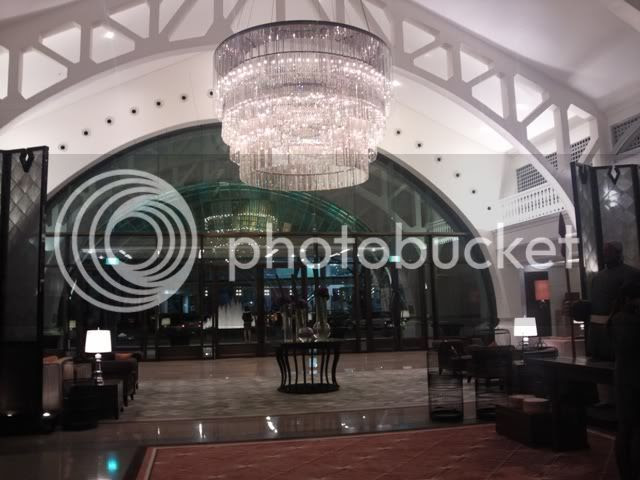 Now it is almost unrecognisable after a S$6 million renovation. Plush carpeting and beautiful chandelier adorned the roof of Clifford Pier. Clifford Pier serves both as the main lobby of the hotel, as well as housing the Chinese restaurant One On The Bund.

A little info on One On The Bund - It is opened by Hong Kong restaurateur Calvin Yeung who operates Shui Hu Ju 水浒居 in Central, Hong Kong. And Singapore's One On The Bund is modelled after Shanghai's original bayside restaurant with a touch of her colonial past. 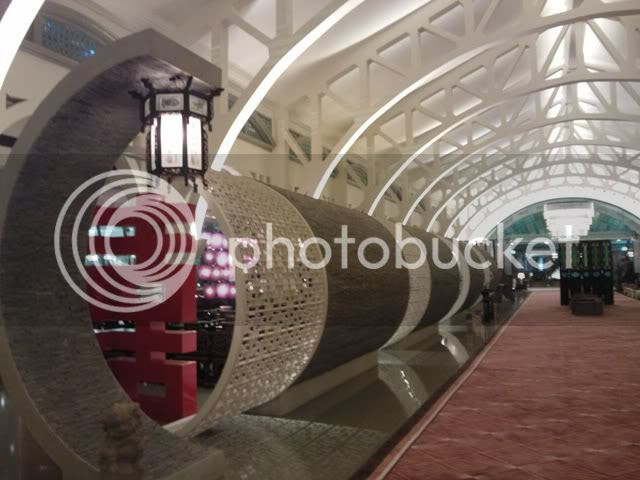 As you can see, the entire hallway is pretty empty. A visiting tourist would never know that this used to be the busiest pier in Singapore as nothing inside seems to indicate its former role. 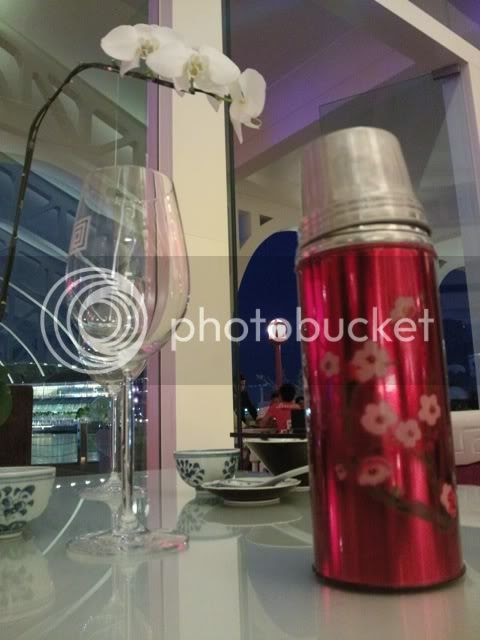 Remember this red metal flask used by many Chinese families in the past? Every table had one. Am not sure why it was placed here and what's it purpose? Perhaps just for decoration. 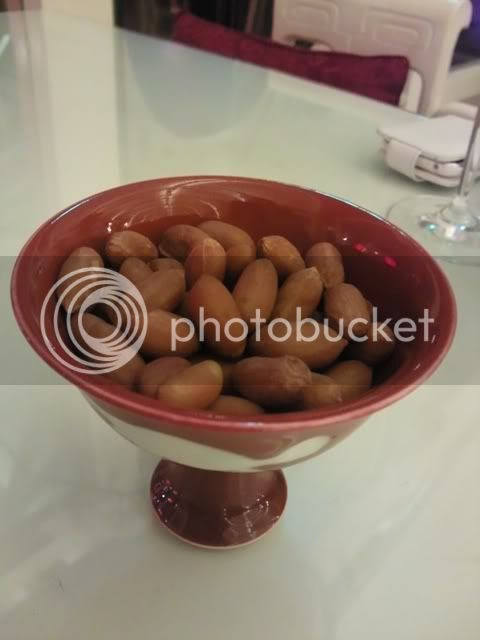 Crunchy peanuts were served upon arrival. 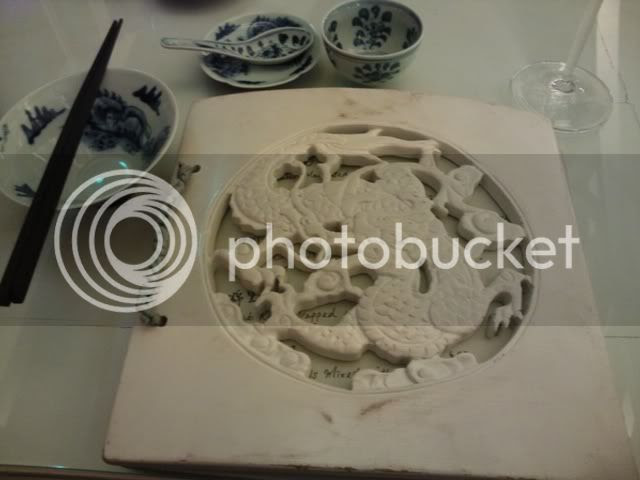 This is, by far, the heaviest menu I have ever came across. The cover is made of really heavy marble. In fact, almost all its dishes are served in very heavy and bulky marble plates and bowls. Pity the young waitresses who have to carry this from one end of the building to the other. 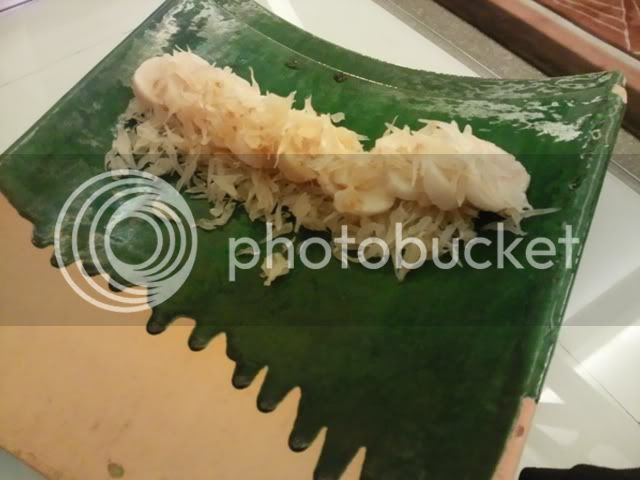 We started off our dinner with the signature appetizer - Fresh scallops accompanied with pomelo (S$22) - Refreshing sweet sour Pomelo pulps with a slightly tangy savoury sauce over fat and juicy scallops. 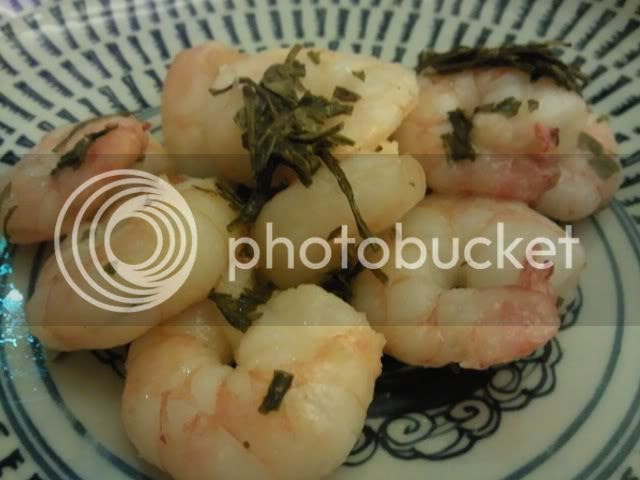 One of my favourite dish that night - Succulent prawns with tea leaves (S$32). Who would have thought that 2 simple ingredients (tea leaves and fresh prawns) could go so well with each other. I thought biting into the tea leaves would leave a bitter after taste, but as the leaves had been soaked in salt water, it tasted fragrant and savoury without the bitterness. 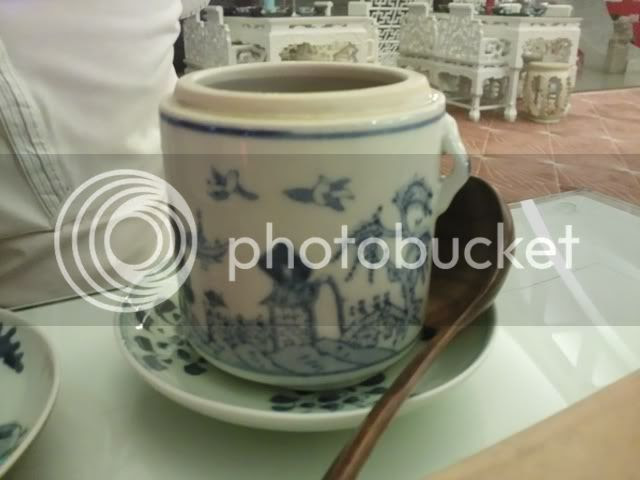 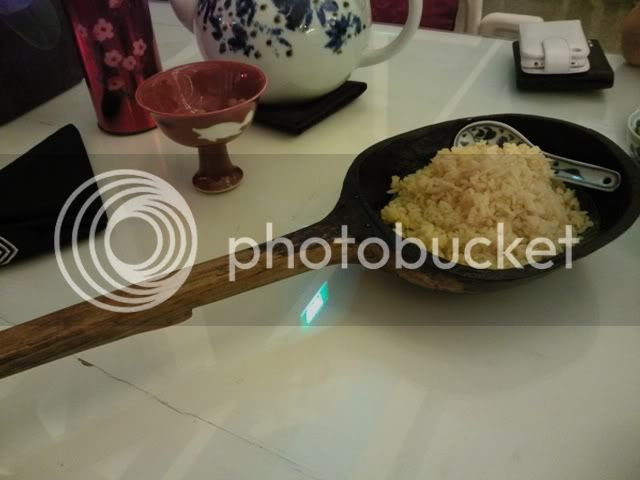 The restaurant spent lot's of efforts to think of creative ways to serve thier dishes, and it was noted in their Crab Roe Golden Fried Rice (S$20). 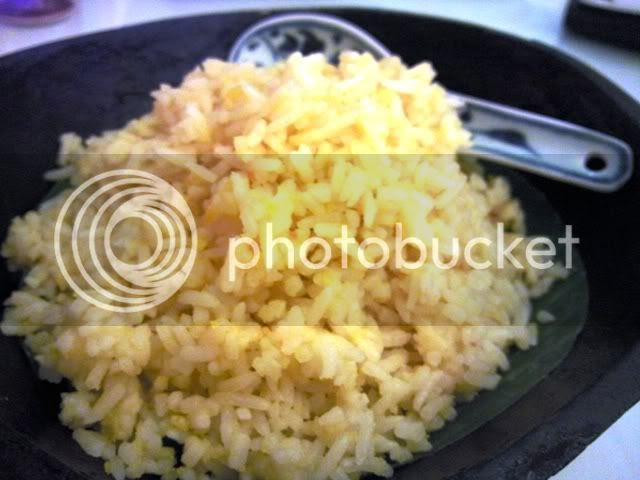 With portions enough for 2 diners, each morsel of grain was covered with crab rose and also golden egg yolk. 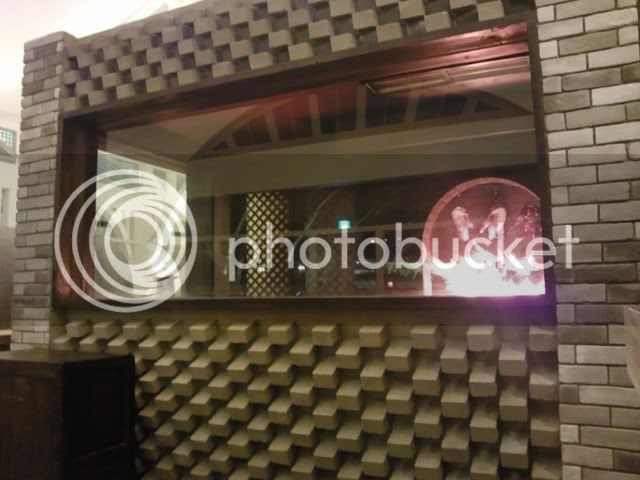 In the middle of the restaurant, there is a huge roasting oven on display. 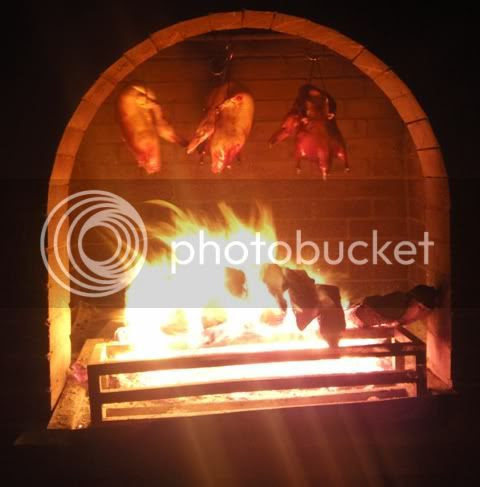 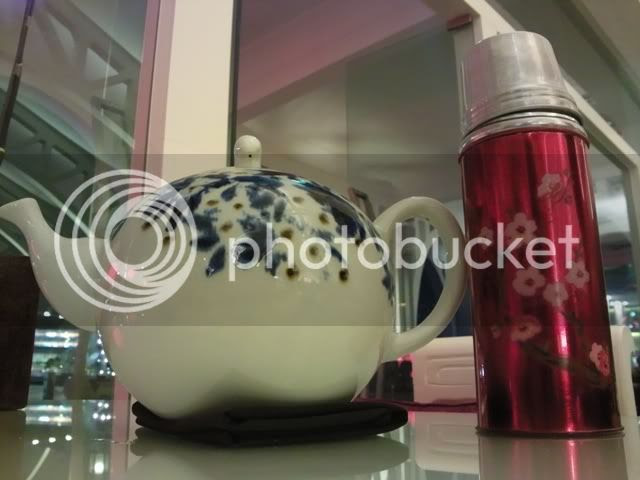 Their tea pots are also incredibly huge. It's so big that you will have some problems holding up the tea pot. Best to leave it to the experts. 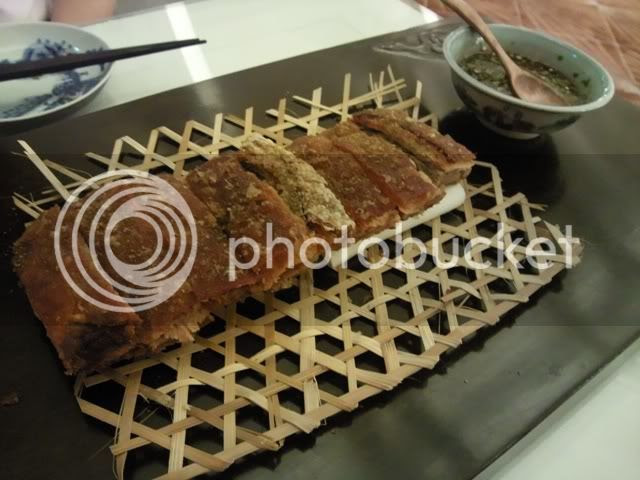 Our final dish took more than 30 minutes to arrive. So is this Crispy Lamb Ribs (S$48) worth the wait? You bet. Think of it as the mutton version of Roasted Pork. The skin has been roasted till crispy, and all the fatty oil from the lamb meat has totally disappeared. It's only juicy mutton with its crispy roasted skin. 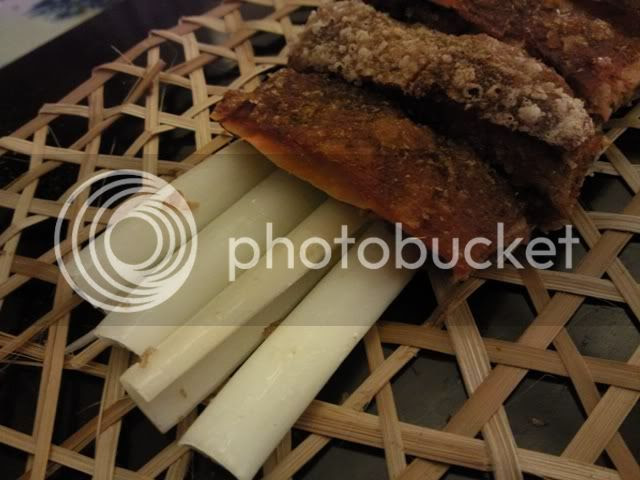 Fresh sticks of spring onions were used to add fragrance to the lamb. Didn't eat the onions though. For those who are scared of the gamey mutton taste, do give this crispy lamb ribs a try as I find the mutton taste quite acceptable. Definitely the best roast lamb in Singapore and a must order at One On The Bund. 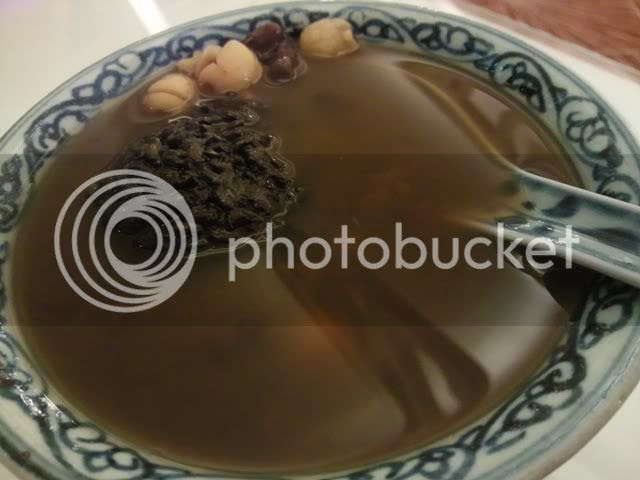 Washed down all the sinful but yummy dishes with a bowl of Lotus Red Bean Soup with Black Glutinous Rice (S$10). Another winner from One On The Bund. The warm red bean soup was not overly sweet, and it's a notch better than the ordinary versions with the sweet glutinous rice. 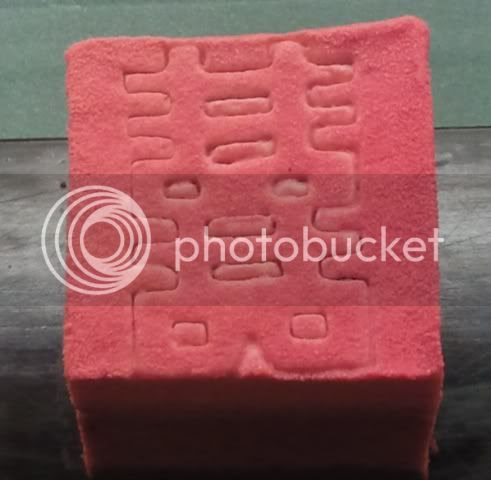 One On The Bund also serves western desserts. This Straberry Mousse (S$8) had the auspicious Chinese character of "Double Happiness" skillfully engraved by the dessert chef. 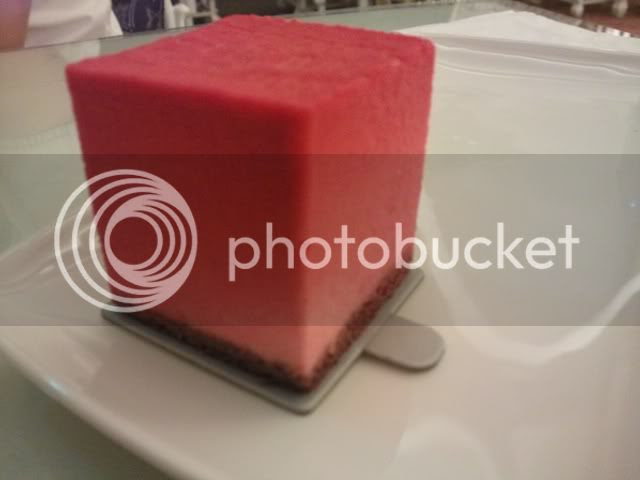 There is tiny bits of strawberry inside this creamy yet light mousse dessert. 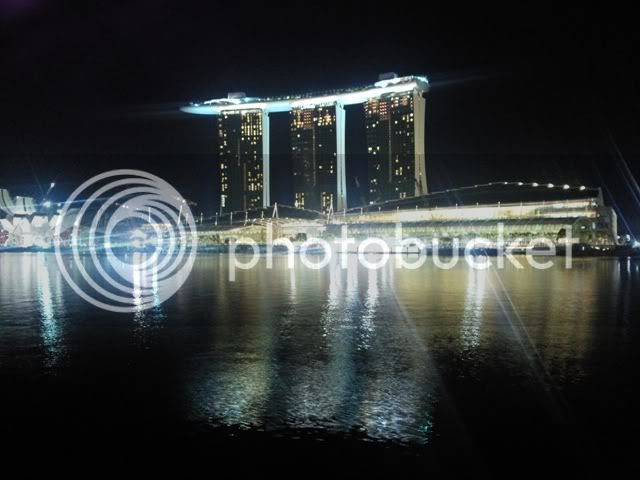 Although the prices of these dishes is definitely about 30% higher than what other Chinese restaurants charge, but given the quality and location, it's definitely worth it.

Not much diners during dinner time on a Sunday night, so diners who want to avoid the average noisy restaurants will now have a new alternative.