It is a well known fact that Tetsuya Wakuda is one of the most successful Asian chef in Australia. 4 months is the earliest possible period to book for a table at the Sydney restaurant. And Wakuda has never opened a branch or a 2nd restaurant in other parts of Australia, or around the world... until now. 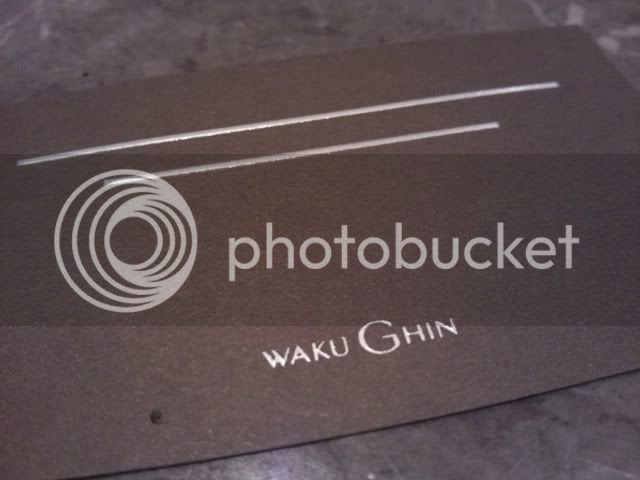 Singapore became the 2nd place in the world where Wakuda opened his 2nd outlet - Waku Ghin (Waku meaning sprouting, and Ghin meaning silver). As the name suggests, the ingredients and cooking style tends to be influenced by Japanese and Asian cooking. 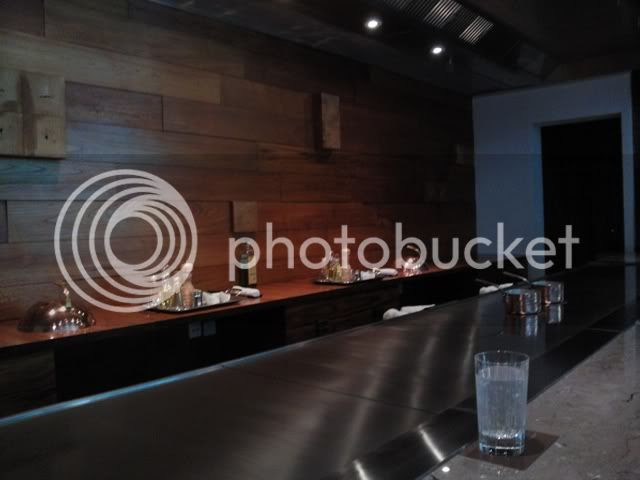 The 10,000 sq ft restaurant at Marina Bay Sands only has seats for 25 diners, and there are different sections within the restaurant.

Upon arriving, the very polite and professional service staff will usher diners to one of the 4 very cosy teppanyaki VIP room, which can sit around 6 diners. Sometimes, you may be sitting with other diners in the same room, but each diner is well assured of being pampered by the chef and the service staff. The teppanyaki grill is gleaming and spotless, and it is hard to imagine that the grill has already been used for a few months here. 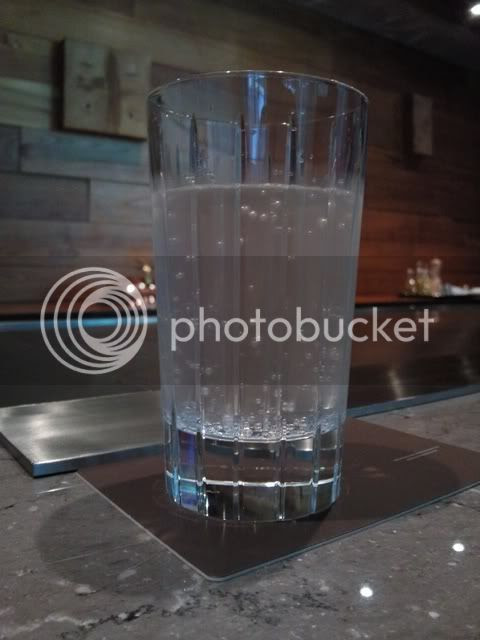 Sparkling Water (S$20 per person - Free flow) is preferred tonight for our dinner at Waku Ghin. 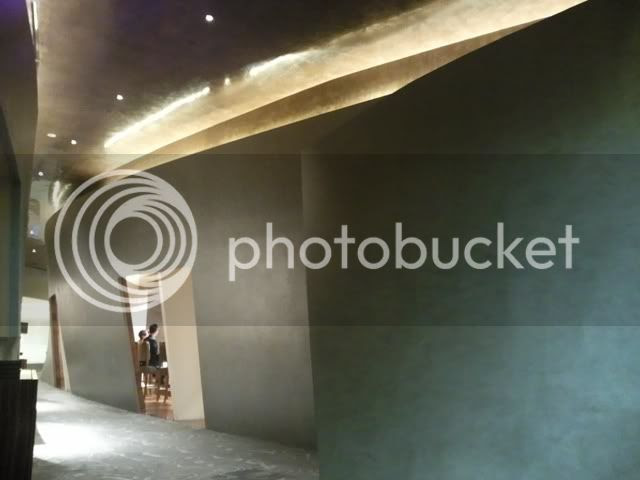 The design of each of the 4 teppanyaki VIP room is pleasing to the eyes. The designer must have taken lot's of effort to design the interior of the restaurant. At 10,000 sq ft for 25 diners, it is truly spacious. 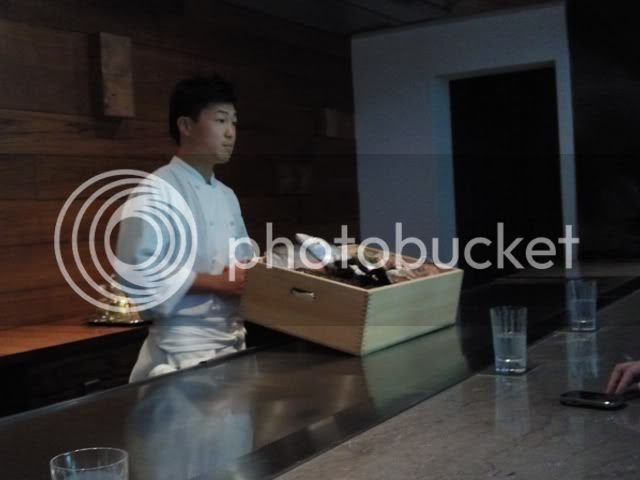 Before our culinary feast begins, the chef will first introduce himself to everyone. Then he shows everyone all the seafood and ingredients he will be using over a box full of ice. Noticed that the lobster was still moving in the box! 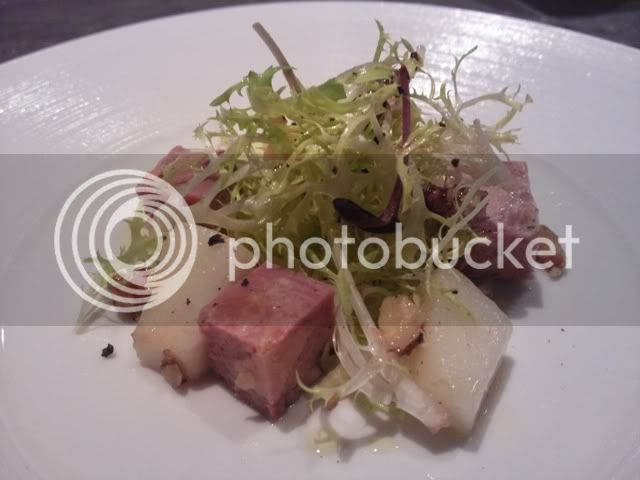 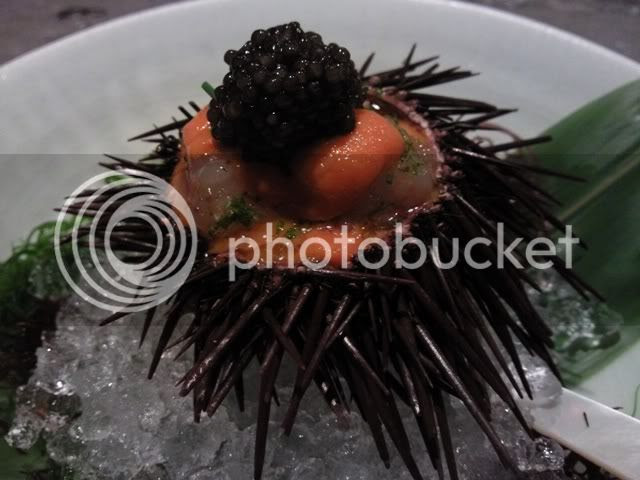 One of Wakuda's signature appetizer - Marinated Botan Ebi with Sea Urchin and Oscietra Caviar. And to me, this was one of the most amazing item for that night. The part that is considered as delicacy, and known in Japanese as "Uni", is the roe of sea urchin and it tastes like the ocean. Sweet raw ebi (shrimps) were mixed with a big spoonful of top grade caviar and creamy yolk. The chef recommended us to mix everything together before eating it. I had fun trying not to topple any of the top grade ingredient into the plate. It was heaven when I send the creamy rich and cold mixture into my mouth. This dish, to me, is one of the greates culinary creation on earth. It is that yummy. 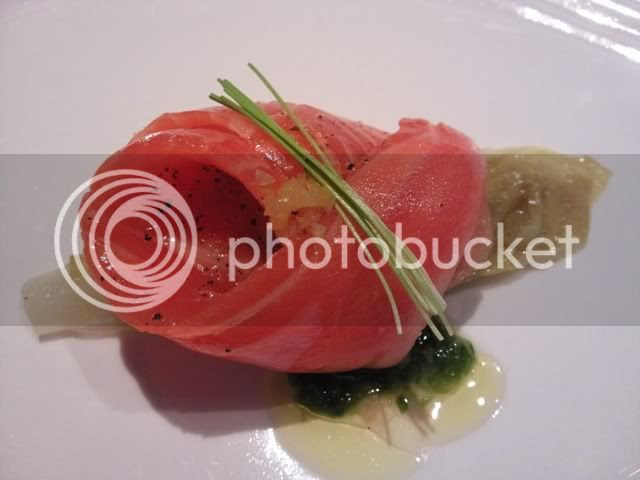 Slow cooked Tasmanian Petuna Ocean Trout with Witlof and Yuzu was our next appetizer dish. Although the fish was fresh and sweet, but surprisingly the side dish of Yuzu salad actually stole the limelight from the fish. 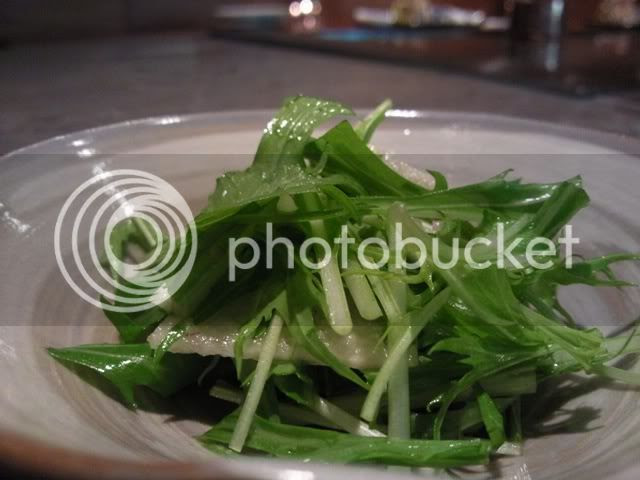 This Yuzu salad is one of the most fruity and sweetest salad I have tasted for a long time. If I could only know the recipe behind the salad dressing, I will make this everyday and eat with all kinds of fresh greens. 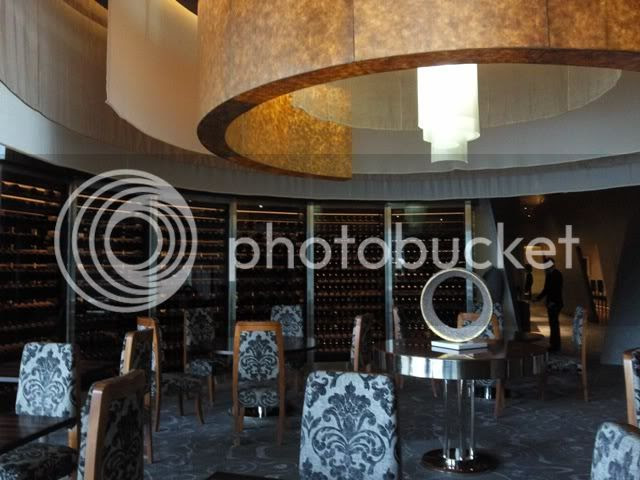 I took a peep at the "dessert room" next door, and even though we were not even halfway through our appetizer and main course, I was already full of anticipation for our desserts. 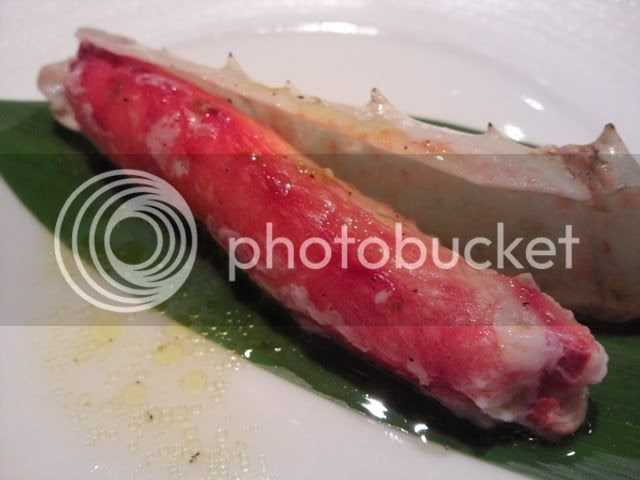 Alaskan King Crab with Lemon Scented Extra Virgin Olive Oil - The culinary visual feast was presented to all of us on the teppanyaki grill. First, the chef dumped a whole lot of salt on the grill to form a small "mountain", before adding a few small droplets of water. Then, he put the fresh and raw king crab legs on top of the salt, and covered it with some bamboo leaves. Everything is then covered and sealed tightly with a brass lid and "salt-steamed" for about 5 minutes. No additional water or any liquid is added for the steaming, only using the salt as the base. The crab leg is then removed, deshelled and served.

The sweetness of the crab leg was brought out by using salt for steaming. And the lemon scented olive oil added some zest to this wonderful dish. 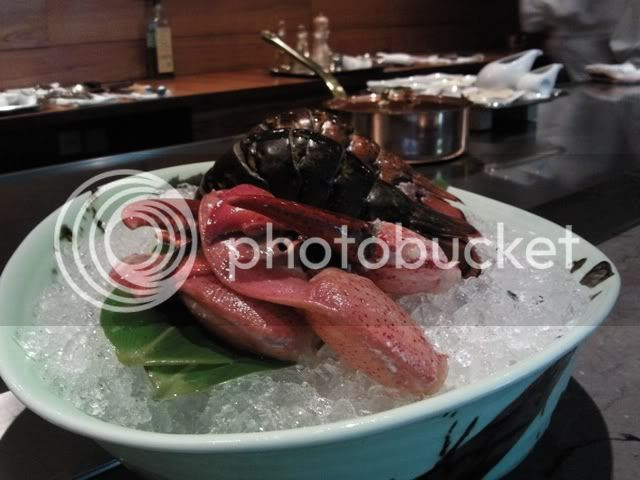 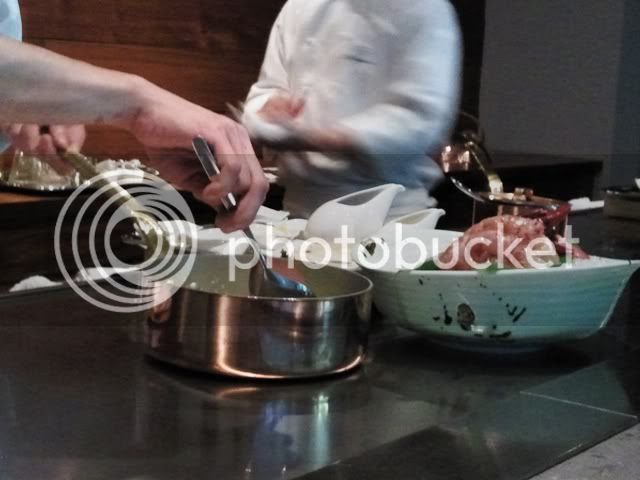 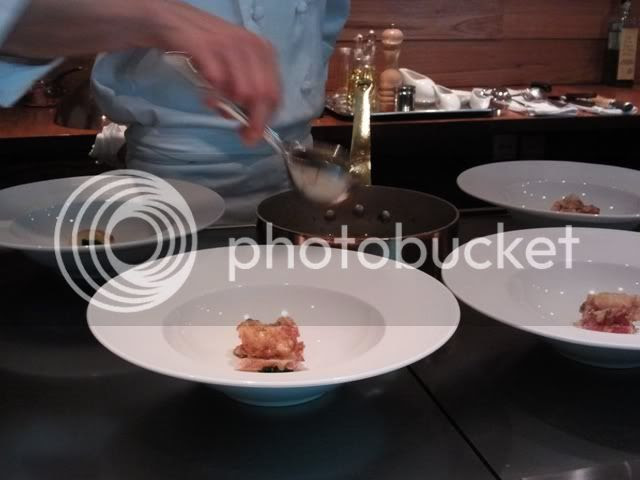 Later, he add in the lobster chunks and whole peeled lobster claws to "braise" them in the boiling sauce for a few minutes till fully cooked. Creamy butter is then added to add fragrance, before scooping everything into a deep dish plate. 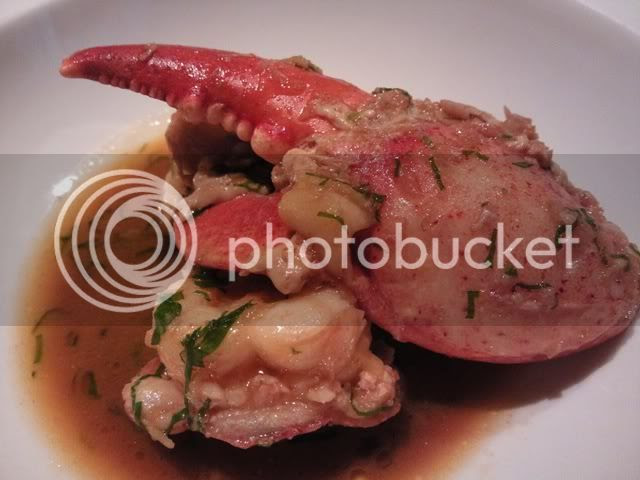 The end result is the Braised Lobster with Tarragon. It is a no brainer that such a dish can only be successful when using the freshest seafood available. When you bite into the meaty lobster claw, your mouth is immediately filled with the sweet juice streaming out from the thick flesh. The Canadian lobster was sweet and crunchy. And the lobster stock was flavourful and had a nice buttery fragrance.

To me, this was the best highlight of the night. 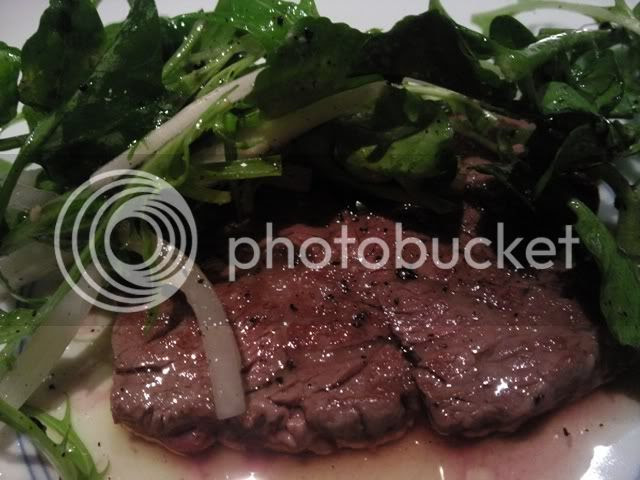 After the seafood, there was more. The chef carefully pan fried Australian grass fed beef on the grille. The Warm Salad of Cape Grim Grass Fed Beef, had one of the most tender and juciest Australian beef I had. Cooked till medium rare, the Tasmanian meat was very tender and flavourful. 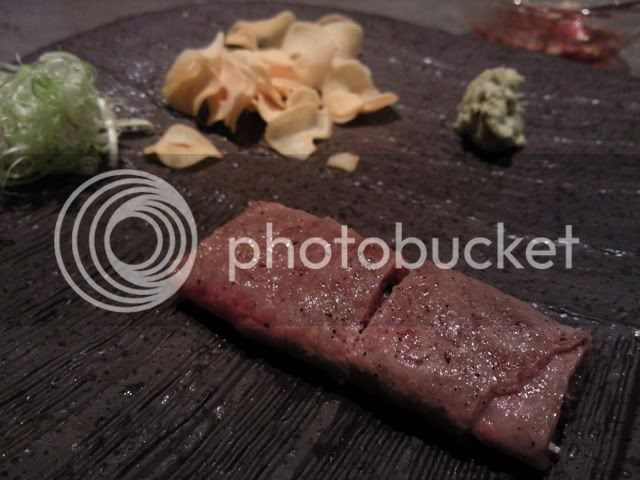 Another beef dish was the Japanese Wagyu with Maitake and Wasabi. The marbling of the Wagyu beef was beautiful. After grilling the beef on the teppanyaki grill, the chef grated fresh wasabi for us. Crisp garlic was also served together with a small bowl of sauce. 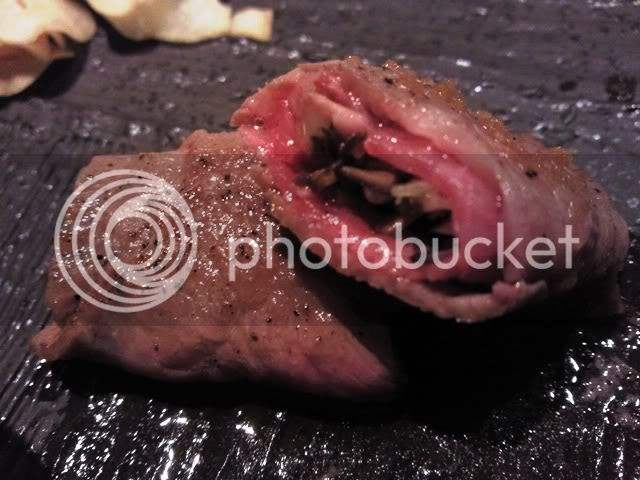 There were some surprises inside the grade 9 Wagyu beef - Maitake mushrooms. The crunchy and sweet mushrooms really complimented the tender beef. 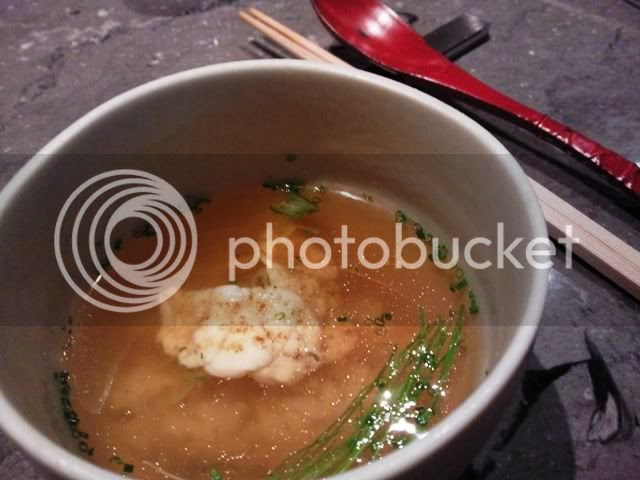 Consomme with Rice and Hirame - The final dish was this rice dish soaked in lot's of tasty chicken consomme with freshly cooked Hirame slices. I like how there were some yuzu bits inside this dish, adding some zest to it. 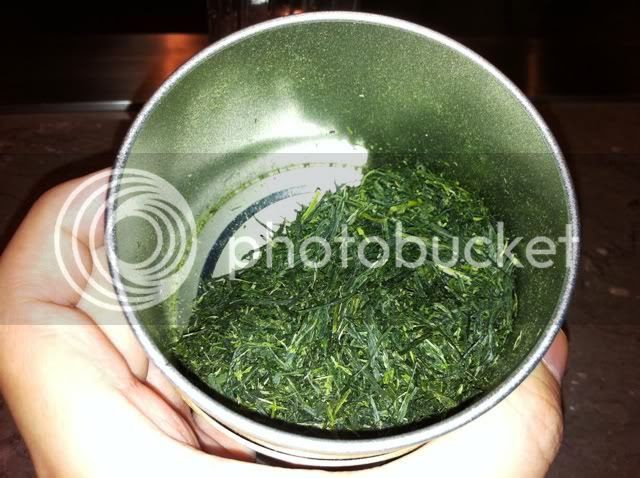 After the dinner, the chef made us each a cup of Gyukuro tea. According to Wikipedia, the very expensive and exclusive Gyukuro tea leaves grow under the shade, unlike the normal green tea which grows under the sun. 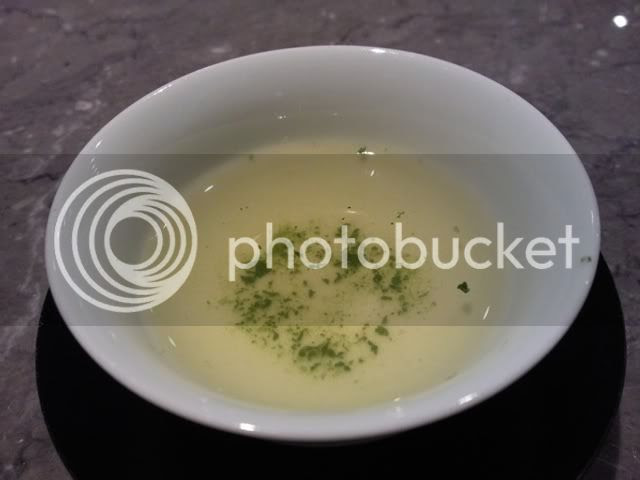 The chef performed a beautiful tea brewing process infront of us and I like how smooth and refreshing the tea tasted. The tea leaves was served only with a tiny serving, just right for the precious slightly savory tea to cleanse the palate. 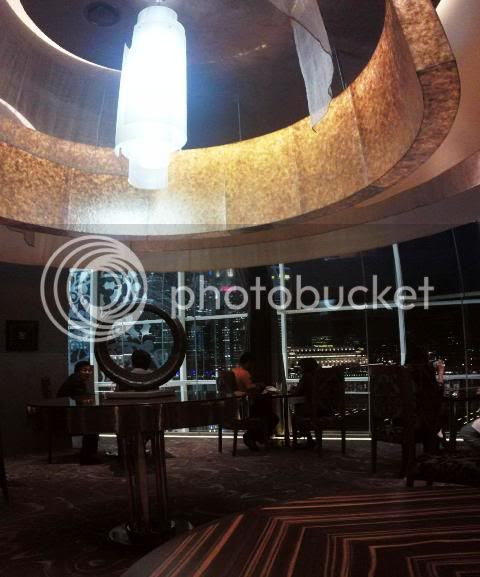 As promised, all diners are now ushered to the dessert room, which boasts a magnificent view of the Marina Bay skyline. There are a few of such rooms here, so not all 26 diners will be packed together. 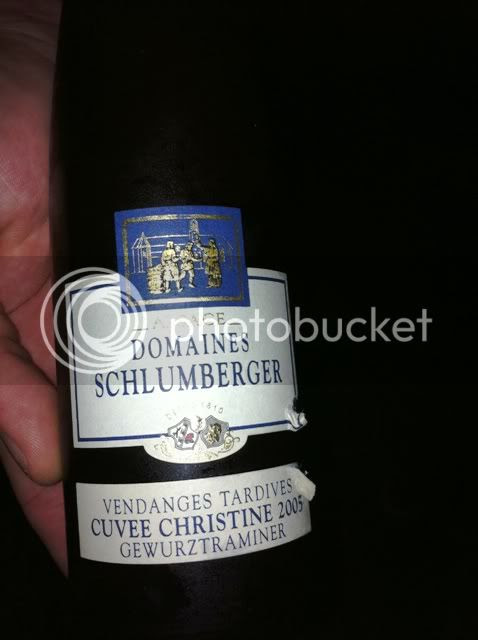 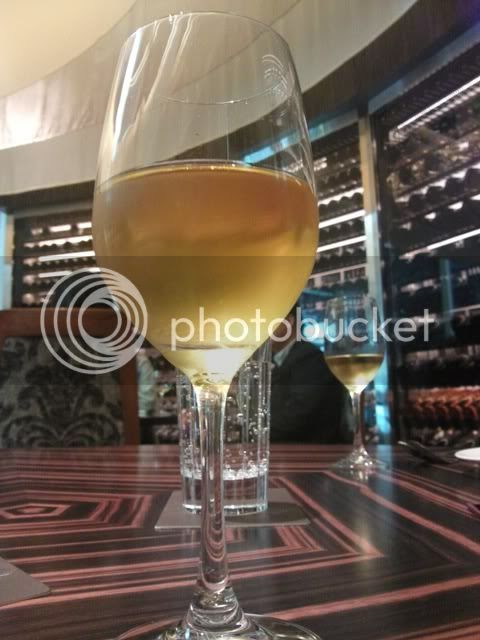 This is a sweet and smooth dessert wine, which I recommend all to try. 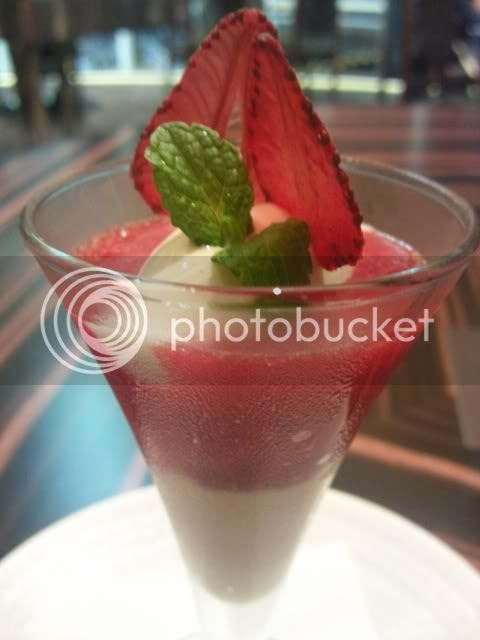 Our first dessert was the deconstructed Strawberry Shortcake with strong Japanese influence. There were creamy vanilla ice-cream inside, and I like how the bits of sponge soaking up the mixture. 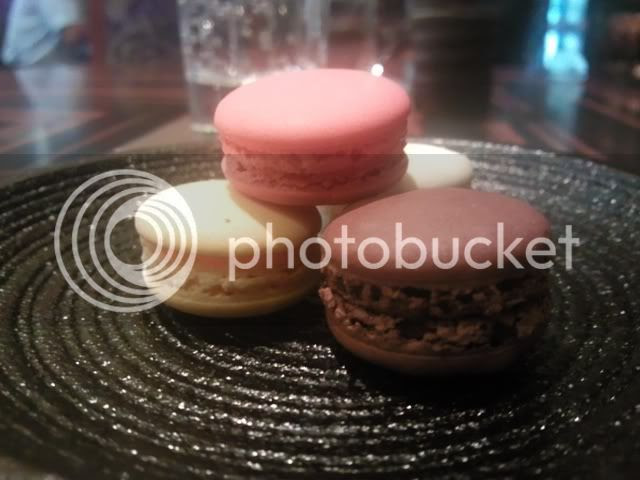 Our next dessert was the Petit Fours (Raspberry, Chocolate, Rum & Raisins and Passionfruit). These macarons were truly amazing. I think that Pierre Herme has found himself a worthy competitor. The macarons had a touch of Japanese, in which there were not too heavy and too sweet. 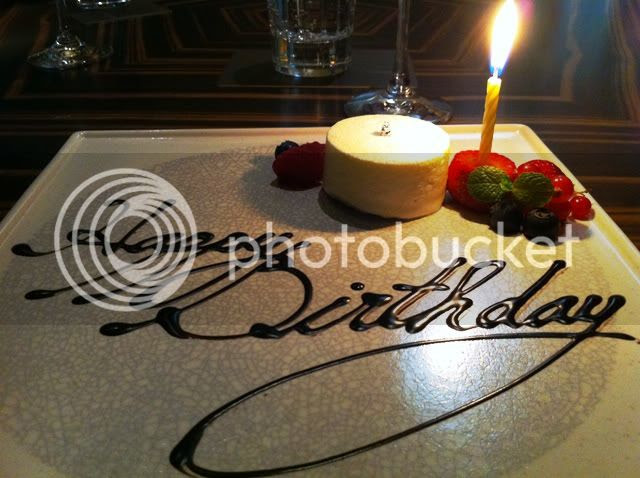 Ghin Cheesecake (Birthday Special) - A birthday surprise from the restaurant. The chef took great pains to write out the Happy Birthday using chocolate fudge. But the main item was of course the Ghin Cheesecake. 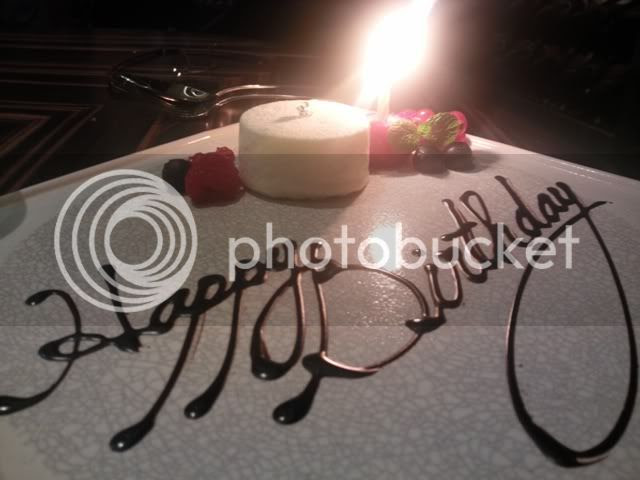 Unlike its western counterpart, the cheesecake here was lighter with a crisp base. As a tiny piece of edible silver (known as Ghin in Japanese, which is also part of the restaurant's name) was added to decorate the cheesecake. 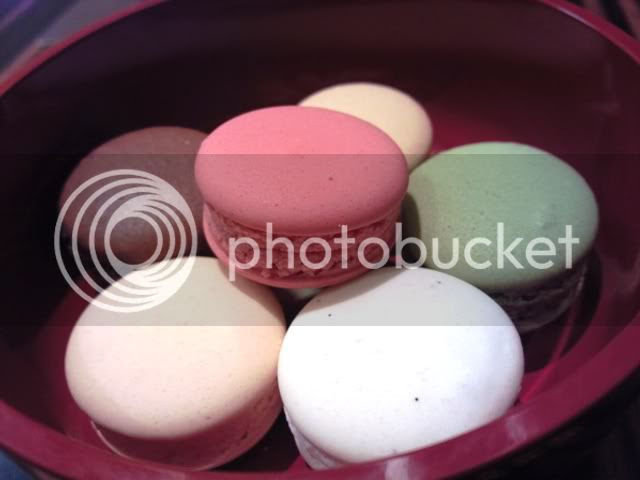 Mr Hitome then brought us even more macaons, which we thoroughly enjoyed. Our extra serving of Petit Fours (Original 4 + Coffee and Pistachio) were also finished in a flashed. 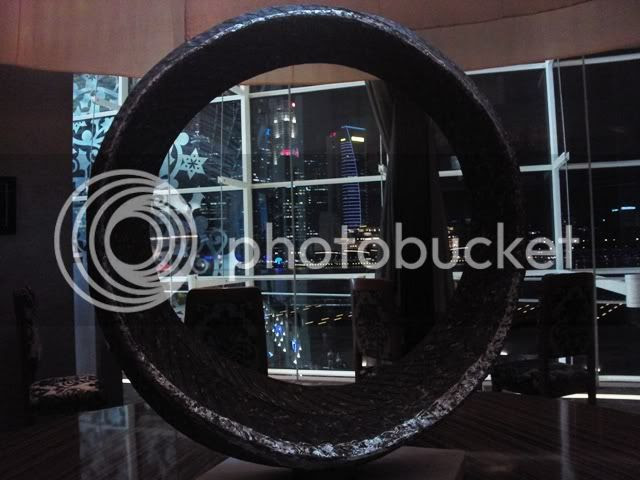 The damage for the degustation menu? S$400. Yes it is expensive, but from my point of view, it is worth every single cent. Be it the experience, food, tastes, service.

And it's safe to announce that Waku Ghin, is truly our Restaurant of the Year 2010.